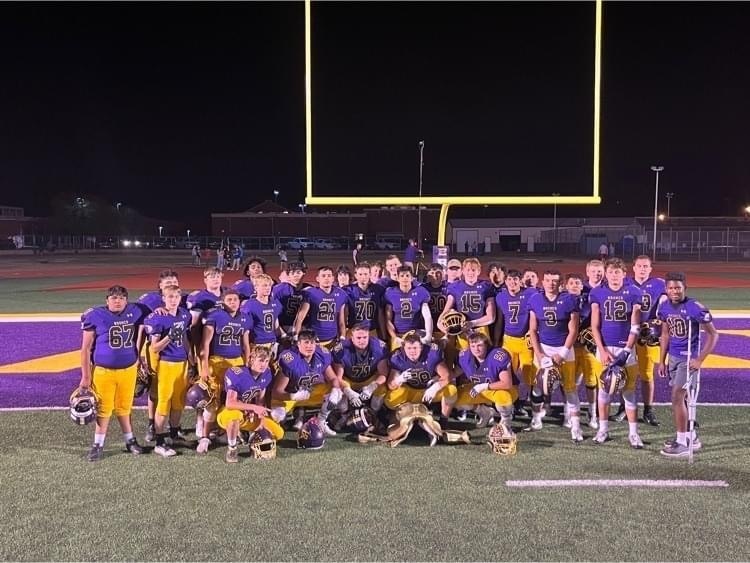 The Broncs capped off a week of homecoming activities with a 61-16 win over Southwestern Heights.

It also meant they kept the prize in the “battle for the golden saddle.”

Lakin scored twice in the first quarter to open a 16-0 lead.

Ross Rider ran the first play from scrimmage for Lakin 43 yards for a touchdown.

After the Mustangs closed the gap to 16-8 in the second, the Broncs scored five more touchdowns to take a 54-8 lead in the fourth quarter.

In the second, Colter Oldham ran in from six yards and the Broncs took a 24-8 halftime lead.

Armando Salcido scored from five yards, Oldham ran in from 35 yards, and Adrik Gomez scored on a 23-yard pass from Beltran to make the score 47-8 after three.

Beltran ran in from 17 yards out in the fourth before Heights scored on a 28-yard run.

Jeremy Oropeza capped the scoring with a 44-yard run.

Oldham rushed for 167 yards on 16 carries, while Oropeza had 84 yards on just six carries.

Three passes went to Gomez for 48 yards, with Salcido catching one for 41 yards and Javion Grand one for 13.

The Broncs collected 462 yards off offense on 49 plays, including 362 on the ground.

Lakin converted 6 of 10 third-down conversions and all three of their fourth-down tries.

Heights had 241 yards of total offense, all by 16 on the ground.

Oldham led the Broncs with 15 tackles (eight on his own, seven assists), while Dravin Chavira had 10 on the night he was crowned homecoming king.

Lakin (5-0, 2-0 in district play) will travel to Hoisington Friday.