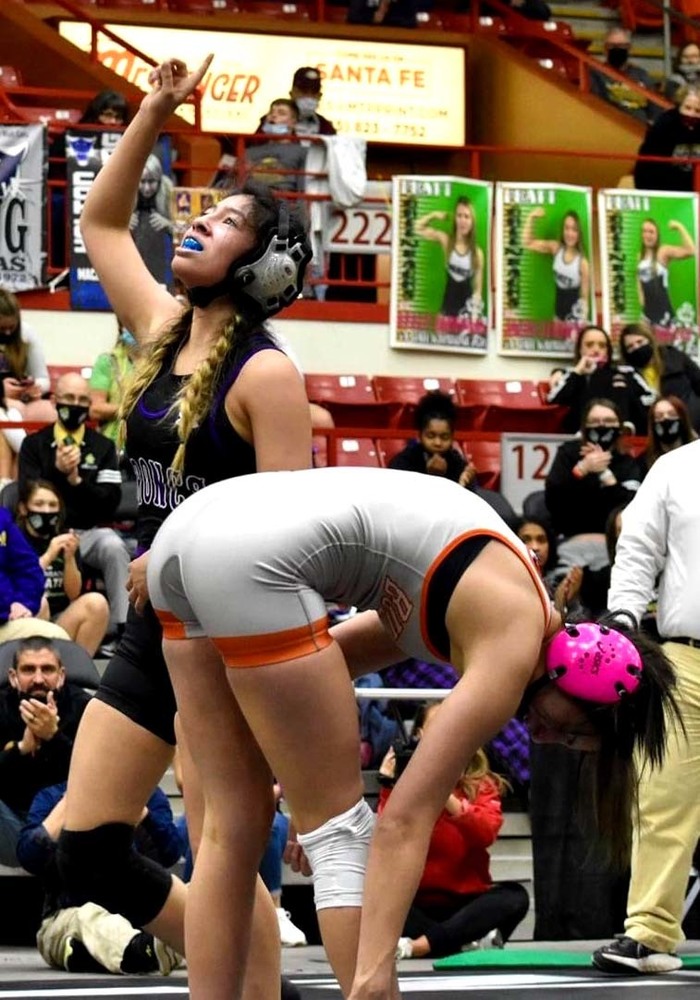 Isabell Ortiz made the most of her state tournament, taking the title in the 115-pound division of the Girls DII Championships at the Tony’s Pizza Events Center in Salina last Friday.

In just the second year for girls sanctioned wrestling, Ortiz went through her three rounds with a fury to take her crown.

Ortiz (29-4) won by a 5-0 decision in her first-place match over Alexis Allen of Independence.

In her opening match, Ortiz won by fall (3:13) over Andrea Cuin of Chanute.

In her semifinal round, the junior won by fall (2:50) over Tyelor Rozell of Douglass.

“Going into my final round, I knew I had to just focus on doing what I do and giving it my best,” she said. “I wrestled­ her last year, so I had a feeling I could beat her. When I lost to her last year (at state in the semifinals), I got caught on a reversal when I was winning. This time, I was going to wrestle smarter.”

Being a champion her junior year gives Ortiz the incentive to repeat next year.

“As a senior next year, I’ll have to work even harder because all the other girls will be working just as hard as me,” she said.

Ortiz placed third in the inaugural state event a year ago in the same venue.

Josiah Ortiz rebounded from a semifinal loss to take the consolation round at 109 pounds.

The sophomore, who placed fourth last year, won her fifth-place match with an 8-2 decision over Reese Clements of Chanute.

The younger Ortiz won by fall (1:30) over Rylee Shepherd of Eureka, but she lost a 7-2 decision against Skyleigh Pflaster of Abilene in the semifinals.

In her consolation semifinal, she lost a 5-4 decision against Ryelee Cagle of Fort Scott.

With just the two girls, Lakin finished seventh with 33 points. Baldwin won the title with 54.5 points.