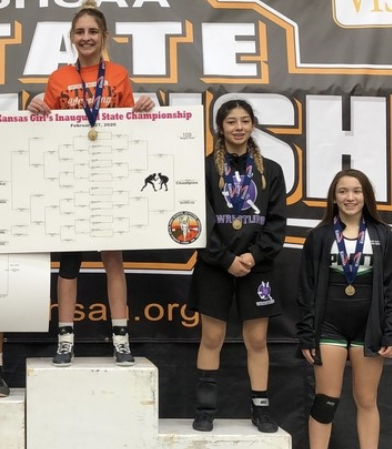 At 109 pounds, Isabell Ortiz received a bye in her first round and then took out Amilia Martinez of Holcomb in the quarterfinals in a 15-0 technical fall (4:19).

In her semifinal match, she lost a 7-4 decision to Alexis Allen of Inman.

That loss put her into the consolation semifinals, where she won an 8-0 major decision over Sarah Zimmerman of Hays.

She received a forfeit over Skyleigh Pflaster of Abilene to claim the third-placed title.

In her quarterfinal, the freshman got a fall (5:56) over Rylee Cagle of Fort Scott.

She lost a 3-1 decision to Kassidy Leiszler of Concordia in the semifinals.

Josiah Ortiz Ortiz picked up an 8-0 decision over Mana Chanthansone of Liberal.

She lost a 10-4 decision to Breckyn Elliott of Great Bend to finish fourth.

At the Class 3-2-1A tournament at Fort Hays State University, Lovelady got one win in his three matches.

Wrestling at 152 pounds, the junior lost his first match to Jeb Nowak in a 13-5 major decision.

In the consolation round, Lovelady defeated Alex Warner of Waubansee 6-4.

In his next round, Tristan Rathbone pinned Lovelady to end Lakin’s run in the tournament.

Lovelady finished his season at 16-18.